My kitchen was seriously TUH. RASHED! (trashed)  It was. For real. I didn’t take any before pics. Intentionally. It was embarassing.  Our family is horrible about cleaning up after ourselves in the kitchen, so it was gross, y’all. But I knew it would get cleaned, so I didn’t stress….I knew all would be well again. And it is!! I once again have a (mostly) clean kitchen! Ok, it’s a bit messy again, but it’s nothing that 10min in there can’t take care of it….and that’s where I like it. Easily clean-upable. Well, except the floor. But we won’t go there. Floors are the bane of my existence….don’t get me started….

So I allotted 2 weeks for the kitchen because it really was THAT BAD. And I went slowly through it. Bit by bit. I cleaned, I scrubbed, I decluttered, I reorganized, I kicked some seriously kitchen BUTT!! Especially in my gnarly refrigerator.  I could have easily gone 3 weeks, I still had some stuff I didn’t get to, but I did enough. I’m pretty happy with it.

The first week was all about cleaning. Every cupboard, every appliance, every surface, every nook and cranny got wiped and scrubbed and cleaned. Well, except the oven and the floor. Never did get to those. Well I did part of the floor, just didn’t finish it. Another day.

The second week in the kitchen was my declutter and reorganize the kitchen week. That way I could focus on a different purpose each week, made each task easier. And decluttering was easier when things were already clean.

Apparently I didn’t even take any after pics….and without the before pics, I don’t know that you’d be particularly impressed anyway…but I did find one before/after set of pics….the cupboard above my fridge, which I knew I wouldn’t be doing much with. I don’t ever go in there and I knew that I had decluttered it last summer, and it’s full of stuff we rarely use, so I doubted there was much to do in there…well I actually did do some decluttering in there:

And here’s the newly clean top of my fridge:
(That cupboard above is the one you can see closed in this pic.) 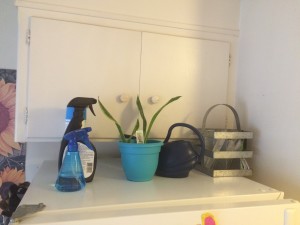 Such a good feeling, being tidy and wiped. Keep in mind….I am NOT one of those moms that cleans like this regularly. This is a once a year thing, y’all! The rest of the year, I could care less what the top of my fridge looks like!!! Seriously! But for now, it’s a nice feeling!!

Remember, this is my annual Purge and Clean….my goal is to do the purging to get rid of all the excess STUFF so as to make the rest of the year easier….for homeschooling, for finding things, for keeping things clean…and the cleaning I’m doing this summer is a DEEP CLEAN that I mostly only do once a year. Or only catch up on once a year. I do catch up on dishes before I start cleaning the kitchen, of course….but things like wiping walls and cabinets and refrigerator tops….that’s something that rarely happens around here, so it’s nice to know that I schedule it in for each summer and know it will get done at least once a year.

So next up….the living room….stay tuned for a post on that!  Post a comment below if you’re joining me and doing some Purging and Cleaning of your own!!

I just discovered this book at work yesterday… #