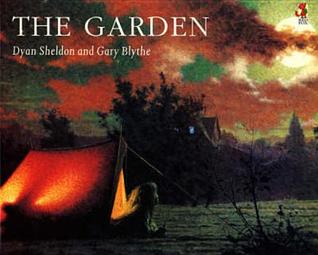 I discovered this book because I have another book by this author and illustrator: “Whales’ Song“, which made me fall in LOVE with the illustrations! So I went looking for more books by this illustrator and found “Under the Moon.”

I found this story to be even more beautiful….and the images just as gorgeous.

A little girl named Jenny finds an arrowhead in her backyard and learns about what life was like hundreds of years ago where she lives. She decides to camp out in her backyard that night and is transported (real or dream? You decide…) back in time to the time of the arrowhead. She meets the original people of the land and learns a little about what it was like during a time when buffalo roamed and campfires were used for both cooking and gathering…

“When the land was as large and as open as the sky. When there were stories in the stars and songs in the sun. When every thing on earth had a voice and a heart, and time was measured by the changings of the moon.”

Such a beautiful story, and the illustrations are just magical. I recommend for older children because the story doesn’t seem to be as engaging for littles. Older children, I think, will better “get” the awe of this time gone by.