Getting back on the Purge and Clean horse

I haven’t written in awhile because life got away from me for awhile there. But I’m getting back on track again, so I thought I’d update what I’ve been up to with my Great Summer Purge and Clean.

Week 2 (Jun 6-13) I made a change in my plan because I found out that our street was having it’s “Big Pickup” (the day that the city will collect large trash items at our curb, like furniture and basically just big piles of trash. So it’s a great opportunity to do some major purging, and all we have to do is get it to the curb.) So since we were going out of town on Monday, the Big Pickup was Tuesday, that left the weekend for us to do the work. If I had stuck with my zones as I had planned, I then would have missed 2 days of Purging/Cleaning in that zone, because I’d be working on the curb stuff….so I just moved the yard zone up to that week, problem solved!

What I hadn’t counted on was that temps soared that week and there was no way I was going to be outside for long in 100+ temps! So I managed to kick butt on the shed and dragged a ton to the curb on the weekend, but I wore out pretty fast and didn’t get to the rest of the yard the rest of that week.

It’s all good, I caught up on some client work that week, so it wasn’t a waste of time. I have been falling behind on client work because of all the purging/cleaning, so it was only fair.

It was gnarly! I forgot to take a before pic until after I had started scrubbing, but I got this pic, midway through the cleaning process. You can see how white the top end is compared to the bottom. Yeah, gross.

Ignore the sections that are darker. The surface has been peeling off for years and we’ve yet to be able to find the money yet to have it resurfaced. It’s on the LOOOOONG “to do” list.

Here’s the tile before I scrubbed it. I had only gotten to the one row next to the tub… so you can see a clean area next to the reddish mold. I had my work cut out for me! Sadly, the black mold just doesn’t come off. I may try bleaching that when I get a chance.

Here’s a less close up view, to get the feel for my tub area and how grimey it was. Yeah, we don’t clean that thing often enough. It’s gross.

That thing requires a scrubby pad and Comet to get truly clean, and I STILL have to put a lot of elbow grease into it!

And here’s the final clean tub!

I know, it’s hard to tell in this pic because we do still have all the discolorations from the peeling surface. But trust me when I say that the first time showering in this after scrubbing all that grime off was WONDERFUL! 🙂  It really is clean!

Day 2 was Father’s Day and the entire day was busy with dads stuff. So no progress made that day. 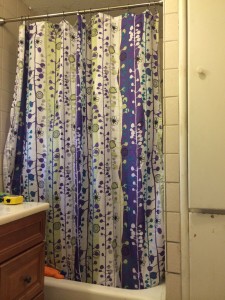 Day 3,  my hubby was home sick and I saw an opportunity to run errands without children in tow, so I took it and went shopping for various things we needed. While I was out, and since it also was payday, I picked up a new shower curtain, rod, rings, and a shelf unit to put all our massive amounts of shampoo bottles on! After all the work on that tub area, I wanted it to look pretty! 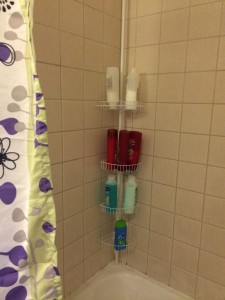 Before, we just had all our shampoo bottles all over the place, so now it’s nice to have them contained again! (Used to have one like this, but it had rusted and I hadn’t gotten around to replacing until now.)

Day 4: Walls
I got a migraine at the end of this day, but I powered through and got rid of a ton of mold all over the walls! I also cleaned the heck outta the grimey blinds!

Day 5: 3rd migraine in 24hrs (had 2 the night before), so I was out of commission all day, no house work done. I stayed in bed, drugged myself with vicodin, and just worked on client work, very slowly, on my laptop, while watching dumb Netflix movies on my phone. Only got up to feed the kids. Thank heavens they are older now and much more self reliant! They were so sweet, letting me rest.

Day 6:  No migraine! YAY! Supposed to work on the floor, and I did do a fair bit of the floor, but I also tackled the messy toilet area and took care of all the mold inside the cupboard above the toilet. Just because I felt like it. I kicked butt!

The pictures for this area aren’t as dramatic…the area wasn’t that trashed. But during the mold wiping of the ceiling the day before, I had dislodged quite a lot of paint chips so the floor was a mess with chips, and the floor around the toilet was gross, as toilet areas are. Inside the cupboard there was still a lot of mold and many of the bottles had mold as well. So I wiped everything with bleach water and reorganized and purged quite a few things and it is a lot better organized now! 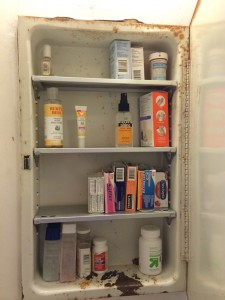 While I was at it, I went ahead and did the medicine cabinet too.

Since I didn’t take a before pic of that, it’s hard to tell what I did, but I got a ton of stuff pitched (lots of expired meds) and even rearranged the shelves (wiped shelves too, they were GROSS! Apparently I didn’t get to this cabinet last summer!) so now I’m quite please with how it looks!

There’s only so good it can look, unfortunately, though, because it’s all rusty. But trust me when I say this is a HUGE improvement!

Today is Day 7, my “Catchup Day”, (which I added recently to every week when I realized that with my client work load, unlike last year, I just cannot keep on top of everything as well this year and I needed to condense all my Purge and Cleaning jobs to less days so I can try to squeeze more client work in the week.) I will be doing the entire vanity and towel cupboard and finishing the floor.

That’s a very doable day for me, and I should still have enough time to work on client work and even my own website work. I’m really looking forward to it too because this area will involve some major purging and I’ve not had much chance for much purging so far this summer. It’s my favorite part! Getting rid of all the STUFF!

I’ve piled my van back with all the stuff to take to Salvation Army, and plan to try to be ruthless as the purging continues…getting rid of more and more STUFF! I hate having all this STUFF all over the place!! It’s time to PURGE PURGE PURGE!! It feels SOOOOO GOOD!!

Ok, I’m off to get some excercise bike in to start my day, and then attack the bathroom again. Wish me luck!

And post below what you’ve accomplished so far in your own Purge and Clean, and what you have planned! I really want to hear! 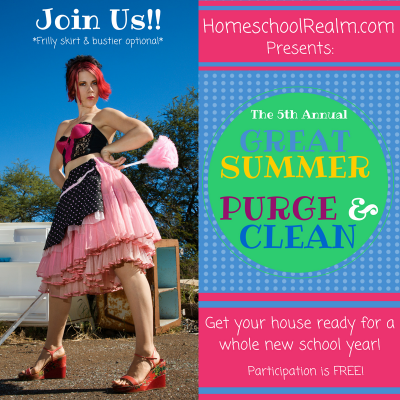 The Great Summer Purge and Clean is FINALLY coming!!