i was just reading this post about a mermaid birthday party and realized that i never did post about what i did for maeven’s party last year! i like to document them all.

so let’s see what i can still remember (it was last november!)

we did it at our friend’s property, margaret hudson’s barn, for those of you that are local and know what that is…because we didn’t have a space that would house everyone indoors in case it rained (which it didn’t, but it was in november, so there was that possibility).

ahead of time…
maeven made a picture of a mermaid: 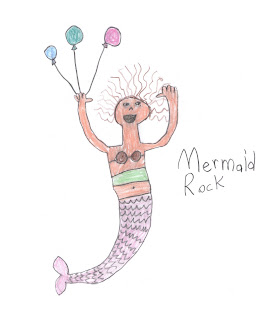 and i scanned it and made a bunch of copies because she wanted to make her own invitations this year (usually we just do evites). then we figured out the info for the inside and made a word file for it and printed it all up and i bought blue cards at a dollar store and had maeven cut all the pieces of the cards and glue them onto the dollar cards with her info.

i also got a cd of mermaid and ocean themed music together by spending HOURS on itunes searching for good music. (can you say obsessed? shyah!) sadly, we didn’t even listen to all of it at the party…but if she ever wants another mermaid party, i’m set!

then for decorations we got a bunch of streamers (my favorite decoration since its CHEAP and you can use it for all sorts of stuff!) in shades of blues and greens. all bought at dollar stores…and also curling ribbon in greens for seaweed. the day of the party i had the kids help decorate by hanging streamers all over the place to give the illusion of being underwater. so we hung them all hanging in strips, and curled and hung the ribbon as well.

i also printed a bajillion coloring pages of underwater animals and plants and lots and lots of mermaids! these were so much fun to find (and there was a ton to find)…brought colored pencils to the party and had parents and kids help color them and hang them up. we cut around the shapes of the things so we had them looking like they were in the water and floating around and such.

we also did white and blue balloons…blew them up and hung them around for bubbles and a bunch of them on the ground.

maeven made her own mermaid play to perform at the party…but was too shy to read it or participate so i got her friends and some family members to act it out. it was very cute!

we found water balls (rubber squishy balls filled with water) that were shaped like octopus and puffer fish at dollar tree, and use that to do a fun name game (well, i THOUGHT it would be fun, but it was too hard to catch the balls, so oh well, they got to keep the balls).

we also did a version of musical chairs, but used pillows from the couch in the room to be “mermaid rocks” and i played a fun version of mahna mahna from the cd “for the kids”…and had them all sit down or stand up for each mahna mahna…and took out pillows every so often…and they had to squish on the pillows together as there were less pillows (no outs). it was very giggly.

we got a bunch of clear and blue and green glass rocks (the kind you put in flower arrangements that are flat on the bottom) and called them “mermaid jewels” and hid them around the yard for the kids to find in a treasure hunt. the jewels were in different shapes: squares, stars, circles…and we got them in bags at dollar tree.

food: i bought all kinds of sea themed food. fish sticks, shrimp, and made tuna fish sandwiches. i also made octopus from hot dogs that we sliced to have legs (they curl up when you cook them). also fishy and whale crackers, ocean (blue) jello cups w/gummy fish in them, blue koolaid…

and the cake was a chocolate cake we got at a grocery store predecorated and then redecorated. i used a butter knife dipped in hot water to turn the flowers into rocks, and added a bunch of blue frosting and brown sugar to make sand and to cover the “rocks” and used our playmobil mermaids to top it. oh and sugar fish and starfish and seaweed to decorate the top and around the edge. used blue frosting to make waves around the sides of the cake.
wish i had pictures, but our camera died right after the party started. 🙁

maeven wore her mermaid halloween costume (we always do this, as her birthday is 4 days after halloween, so whatever she picks for one is for the other as well).

i had a bunch of other games planned, but we didn’t do them. i plum forgot some and others just didn’t feel right to do at the time…the kids were already having fun. 🙂

i need to find the page in the notebook that i wrote all my notes down in to document this more…but that’s all maeven and i can remember for now.

it wasn’t entirely what i had wanted, since we skipped some stuff i thought would be really fun (but i always over-plan…never enough time). but it was a big success anyway! 🙂

from now on i have to make sure to blog as soon as the party’s over, despite how tired i am, because trying to remember it all 8months later is hard! LOL!

A little party song to get your day hoppin!

Shut off timers are my friends

waking from my past