i first wrote about tyren’s dental situation here. and then latest post about it was here.
well…
i can’t seem to find any posts that i filled in the blanks in between…so i’ll give a brief recap and fill in the blanks.

found out tyren has cavities (i already knew it, i could see them…the fronts of at least 3 of his side teeth had brown areas near the gums), from first dentist. bad experience, tyr freaked out at the first dentist and wouldn’t calm down til we left so no one could even look at him. (although for some reason he was ok with the xrays…i think because they did that first and after that he had had enough.)

took him to dentist #2 to get a second opinion (read that first post for all the drama surrounding this whole thing). tyr wouldn’t even LOOK at the dentist, much less let him look at his teeth. flipped out again, crying and freaking out. no good.

took him home and over the course of a couple months, bombarded him with tons of books about going to the dentist and stumbled upon this FABULOUS dvd on the net:

played it over and over and OVER for him…(he LOVES it! and its REALLY well made, so even *I* don’t mind watching it!) and did just as they recommend on the dvd…we “played dentist.” a lot.

took him to dentist #2 for a new visit. NO PROBLEM. he was happy and relaxed and even let “dr doug” look in his mouth. wow, new child!

dr doug said he could try to do the work with gas and do it a little at a time…made new appt.

mistake: i made the appt for 2 days before babyfest. dumb dumb dumb.

got to the appt after prepping tyr ahead of time about the visit and practicing and everything and yet, he flipped out in the car and wouldn’t get out of his car seat. hysterical crying again. no go.

i figured it was a bad week. the week before babyfest is a very very stressful week for us all…with all the work i have to do for it.

rescheduled appt for 2 weeks later for our LAST TRY at doing this with dr doug. talked to tyr and explained that if he didn’t let dr doug do his teeth that we were going to have to go to a new dentist that we don’t know and that new dr might have to put him to sleep to do his teeth (the truth, even though i didn’t want to explain this to him…but i was running out of options and really needed him to cooperate!) he said ok, he’d let dr doug do it. i didn’t want to get my hopes up too high.

went back this monday for the new appt. 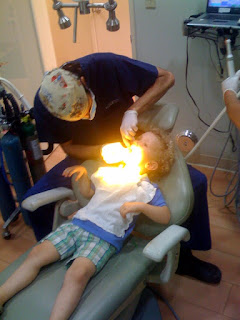 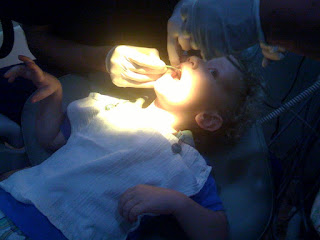 some of the things that i think really made a difference were:

so he got the first 3 teeth done! no gas, no anesthesia, no problem!! next we need to get his molars worked on…dr doug said he will probably need the gas for that and to use some anesthesia (i’m guessing he means novacain). but at this point, tyren is pretty cool about the whole thing…so i’ll make sure we ALL go again, to up our odds of it going well, and we’ll be playing dentist again! dr doug even gave us the rubber thing they put on his nose for the gas so that he can play dentist with it! 🙂

god, i canNOT tell you how friggin relieved i am about all this!!!

next appt is in a month. i’m not too worried but i know i’ll be a bit nervous the day of, until its done. but HALLELUJAH that we managed to finally get past the worst of it!!

and to think that we could have just gone along with that first dentist and taken him to a town over an hour away to have strangers put my baby to sleep and take him away from me! i cannot even imagine how hard that would have been…the idea made me practically hyperventilate!!!

PHEW! i cannot tell you how much weight is off my chest now!!!

Motto to live by!!