ok summer isn’t officially over yet. but its feeling nearer to the end. the light at the end of the tunnel is getting brighter! it was an absolutely gorgeous weekend, in the low to mid 80s! felt like our hellish summer heat was finally over…though i know the temps will soar again this week and continue until we finally get to october, when we’ll see fall weather finally. it was a marvelous reprieve.

my mood so much improves when the heat is on its way out. i detest fresno summers. with a passion. i spend very little time leaving our house when we reach the triple digits. not only is it physically more bearable, but my mood doesn’t plummet quite so much, as it does when i am forced to get out and endure that hotter-that-hades nightmare. i can’t even begin to put into words how much i hate the summers here. thank god the other seasons are so delightful in comparison. even if they are short. winters here are so mild, i don’t even own a real winter coat and pretty much never wear gloves, unless we “go to the snow,” or walk xmas tree lane at night.

soooo…with the summer’s end comes a new school year. as homeschoolers, we are not bound to the public school schedule, but it just feels natural falling in line at least a little with it. back-to-school season in the stores is a bounty of supplies that makes my heart go pitter-pat. how can i not participate in the annual ritual of gearing up for a new year of learning with fresh pencils, crayons and markers and a bounty of notebooks and binders? ahhhh, it makes my heart all a flutter! 🙂

my goal is to “start school” (not that we ever really stopped…our entire lives are rich with learning! i consciously make sure of that!) this coming week…if all goes well…and get a schedule of the 3Rs at least into a rhythm with both kids. i’m much happier unschooling the other subjects…it is just a joy to go where our interests take us.

this year maeven has decided she really wants to dive deeper into ancient egypt, a subject which we’ve already spent a good amount of time on (but hey, who am i to say that we can’t go back to it again? ancient egypt IS pretty dang fascinating, don’t ya think?) and also wants to learn about colonial america.

the problem is that i had been stuck for quite awhile on sticking with a chronological order to history and we had gotten bogged down in the medieval world for awhile and got offtrack with our history stories completely in recent months. (ah well, the hell of summer heat makes it damn near impossible to stick with any sort of routine anyway, so i am just giving up on trying. we do whatever we feel like when its too hot to care about anything.) but i have been thinking for awhile that if i can just get our history timeline off the hall walls (where its pretty much not noticed) and into the new art area (in our newly remodeled “big room”, where i think it will get much more attention), we probably will have not problem bouncing around to different historical time periods. as long as we mark them on the timeline as we study them, so we can keep track in our mind as to where the different times are in relation to one another.

personally, i’m looking forward to diving deeper into american history since i remember next to nothing about it from my own schooling. public school is, simply put, HORRID at this subject generally and i always thought the subject was boring as hell as a child (as a typical product of the public school system). its taken many years of adulthood to finally get my joy of learning back. really glad my kids probably won’t ever have to go through that process of RElearning to love learning, since they won’t get it killed in the first place!

i’m really excited by the new ideas i’ve discovered from the book: “Homeschooling and Loving it!” which include helping my children set their own goals for their own learning. its a good blend of unschooling and structure. just perfect for me, i think! i had been trying to do something as simple as this for awhile but for some reason hadn’t actually thought of this specific route…sitting down and talking with each of my children about what it is exactly that they’d like to accomplish from each subject. of course i also add my own goals to what they’ve told me (i’ve never been a real unschooler…just sorta have leanings in that direction). i think it should really be an interesting year.

maeven’s main goal is to become a better artist, specifically in drawing. tyren fluctuates between wanting to learn math and wanting to be a better artist, like his sister. he’s still a bit young to fully understand my questions, but we’ll go with it and see where it takes us. 🙂

i’ve written down all the things they’ve told me for each subject that they would like to pursue this school year, and we are going to build up our daily learning from there. its been pretty exciting, as maeven is old enough now to do so much more to help with the planning and implementing…as is evident of her gently tutoring her brother on how to write his name just this past week.

oh let me tell you about that, this was SO dang cute! tyr learned to write his name quickly in just one short lesson from his patient big sister! he had sorta known how to write some of his name for some time. but really only had mastered the “T”, and was hit or miss on the other letters. i have been remiss in teaching him, even though its the one thing that i am a firm believer in my little ones learning at a young age…second child syndrome, i guess, i simply never got around to it. well maeven took care of that problem! not only that but she taught him, as i requested (had to argue w/her about it actually), to write his name with only the first letter capital. i made the mistake with maeven of teaching her all capitals as these are easier for first writers…but learned after the fact that REteaching her how to write her name properly with just the first letter uppercase, and the rest lower, was a big job. i vowed to not make that mistake with my next child. and i didn’t! well, maeven didn’t. 🙂

now my baby is writing his name very well after having practiced it just a couple times with maeven! and quite neatly too! i’m so proud!! the next day after the first lesson, she taught him (per his request) how to write his last and middle names too! rock on! 🙂

just another example of how so many things work themselves out naturally, as so many of the things i have put energy into worrying about have worked themselves out with little or no direct help from me. i tell ya, there’s a pattern here that i need to remember! not that i want to leave all to chance…but just to trust a little more will reduce my stress level greatly, i think! 🙂

anyhoo, about the upcoming week…i still have much to prepare. i have library books to order and a schedule to iron out all the kinks from…figure out a way to make it work so that we can stay on a loose schedule (i suck at schedules, so loose is probably the only way that will ever work for me), and yet still have lots of flexibility to go where our interests lead us…something i put a lot of value in.

i decided i wasn’t really digging one thing about charlotte mason education…and that was scheduling specific blocks of time for different subjects. i just don’t see that ever working for us. i would love it if it did, but i just can’t seem to make that happen. (i still love so much more about her philosophy, though, and will still pursue other aspects) so instead, i’m going to go with what i think will work better, and that is to schedule specific things to be done for the week and day, and we will accomplish them in a way that works for us that day. so, for example, i’m scheduling us to do 5 math lessons a week for each of the kiddos…if they decided they’d like to knock out a couple in one day, then we’ll go for it. if they’d rather space them out over the week, that’s fine too. so long as we get done what we need to get done for the week. we’ll see how it goes. i can see that i may need to tweak things even more as time goes on…but staying flexible will always remain a priority for me anyway.

and of course i’m doing all i can to make sure that the materials i am using are appealing to each of my children as well as myself. i’m not interested in cramming info down their throats. there’s no point. not when there’s so very many options out there…there’s bound to be something that will work if i just can find it! 🙂  anyway its darn near impossible to force someone to learn if they don’t want to. so my life’s purpose right now is to make sure that they WANT to learn…by picking and choosing my materials very carefully!

well the time has gotten away from me and i must get to bed if i’m going to get enough sleep for tomorrow’s 6.40am walk. toodles! 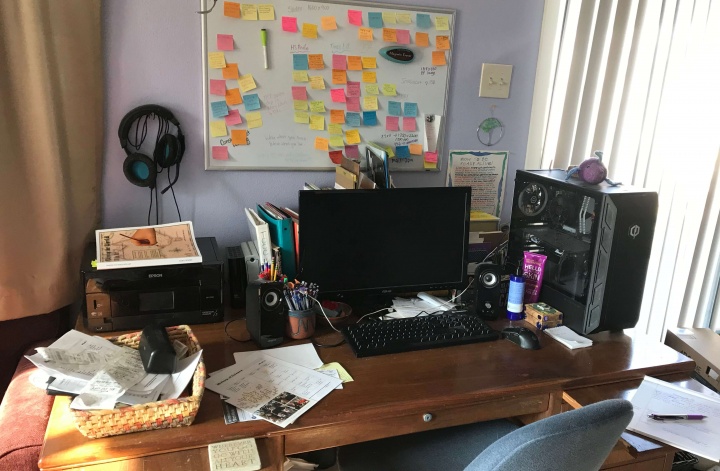 On Being a Homeschool Mom with ADHD

Make a rain gauge out of a soda bottle